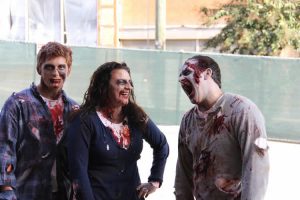 We know, it’s not even September yet but we can’t WAIT for October to get here! It’s going to be a month full of horror – and zombies! There are two big zombie events going on in Canton, GA this October.

Lock your doors and protect your kids – Canton, GA is about to be invaded by hundreds of zombies! This is the second year of the Cherokee Zombie Fest and Food Truck Fair in downtown Canton. The square will be full of Zombies, Daryl Dixon wanna-bes, zombie hunters, and other assorted humans. The Zombie Apocalypse stars on Friday night at Hobgood Park with the 5K Zombie Fest Run and includes both a 5K and a Fun Run. Show up early to get transformed into a Zombie for $5. If your hero is Daryl Dixon, you don’t want to miss the Motorcycle Ride from Kotic Kustoms in Woodstock to the Cherokee Zombie Fest in Canton. You’ll get V.I.P motorcycle parking in the middle of the event and a special edition t-shirt and wristband for free admission. For the humans that are going to be heroes when the world really does go to the Zombies, there is a Response Unit Vehicle Show to put your Zombie Apocolypse get away vehicle up against the rest. Prizes will be awarded to the top 3 best response vehicles. This is just some of the fun that will be happening at Zombie Fest. You don’t want to miss out on the Left 4 Dead 2 video game tournament or any of the delicious eats – and no we don’t mean the other humans. We’ll have some of the favorite local food trucks here to serve the tastes of those that still have a heartbeat.

There are Walking Dead fans all over the nation but we are the lucky ones that get to say that we are from the great state of Georgia – the home of the show! The new season premieres on October 12th, just in time for Halloween. Kick off the new season of your favorite Zombie show by going on a tour of all of the filming locations.