They say patience has its virtues, but that is easier said than done. Among all of the lessons I’ve learned serving on Canton’s City Council, patience is not only a virtue, it’s an absolute requirement. While government often moves at a slow pace, I am proud to begin seeing some very tangible evidence of the progress our mayor and council have made in the past few years.

I could report on many projects and initiatives, but I will focus on a couple that have been in the works for several years. One of the most complex initiatives the city has tackled was the consolidation of the city’s fire department with Cherokee County. The process was painfully slow, challenging, emotional and, quite often, controversial. However, our city leaders and staff, along with those of Cherokee County, persevered and arrived at an intergovernmental agreement to ensure our taxpayers would receive the highest quality fire services at the lowest possible cost. It required hard choices by everyone involved. Most of all, it required political will to get the job done. Mayor Gene Hobgood, City Manager Billy Peppers, CFO Nathan Ingraham, Chief Dean Floyd, our council’s Fire Services Committee, and all council members rolled up their sleeves, set emotions aside and studied the data. The city was faced with buying several new fire engines, building new fire stations and expanding our fire staff at a great cost to our taxpayers or to consolidate. We chose the latter, and the transition has been professional and seamless, thanks to efforts on both sides.

Fast-forward two years, and we recently got the great news that Cherokee County Fire and Emergency Services has achieved an ISO rating of 2. This means city residents and businesses will see a reduction from our previous Class-4 to Class-2 which could mean a large difference in insurance costs. The Insurance Services Office (ISO) is a private corporation that evaluates industries for insurance rating purposes. There are approximately 46,000 fire departments in the U.S., and just over 1,325 departments have obtained a Class-2. This means Cherokee County Fire now ranks in the top 4 percent nationwide. Yes, the results were worth the wait!

Another ongoing project is the former Cherokee County School District property in downtown, comprised of the former Mill Office and Canton Grammar School. When CCSD announced their plans to demolish the two historic buildings to build a new administrative office, the city intervened and negotiated a land swap for property at The Bluffs. Thanks to the efforts of many, we were able to secure a developer, the Harris Group, which agreed to restore the two buildings for adaptive reuse. At the time, this decision also was controversial. Many merchants were concerned about the loss of the downtown employees and its impact on their business. Others criticized the city’s decision to protect and preserve two buildings that were beyond repair.

Last month, we celebrated the opening of Panera on the same property, and the new building was designed to blend with the historic aesthetics of the mill office and grammar school. Panera has been an overwhelming hit and yet another reason downtown Canton is becoming a dining destination. In addition to the healthy and sustainable food options and convenient online ordering, I am most excited to see all of the young people who are enjoying the new restaurant while working on their laptops or tablets throughout the day. Better yet, the new development also ensures the addition of 125 new public parking spaces for downtown customers and visitors.

Again, these are just two examples of long-term projects and initiatives that are moving Canton forward. In both instances, they began with controversy due to the change they represented from known to unknown. Like all initiatives, we had to wait long enough to begin to see and study their impact on our city.

In September, the council passed a new restaurant district ordinance for a well-defined area of downtown. Like others, it was not without controversy, especially since this initiative involved alcohol and the ability to walk around downtown with an open container of a single beverage. Many surrounding cities have similar districts, and some are even expanding them. As with any new program or ordinance intended to continue the ongoing revitalization of downtown, I am excited by the district’s potential to attract new businesses, especially retail, and encourage existing merchants to extend their hours to accommodate increased consumer activity. We have new people discovering our great city every day, and it’s not uncommon for them to experience long waits for the wonderful restaurants that now call Canton home. I also see this new district as an added amenity for our citizens who welcome this experience. Encouraging walkability is a key concept in our Canton Forward master plan, and we want as many people as possible to discover all of the amazing assets our downtown has to offer.

The restaurant district is simply an additional component in the collective products and services that continue to expand Canton’s appeal to our diverse citizens, businesses and visitors. It has never been one thing or program that has defined our success; it’s an ongoing work-in-progress that requires constant nurturing, refinement and a genuine desire to embrace and pilot new ideas that will continue to move Canton Forward at an appropriate pace. As with other initiatives, the proof will be in the pudding, and we are giving it a trial run of one year to generate the necessary data that will ultimately inform its fate.

Speaking of pudding, the stresses of public service sometime require the most comforting food possible. A couple of weekends ago, we had friends visiting from Blue Ridge, and we took them to dinner at our delicious new Peruvian restaurant, Mazzato. They loved it, but I couldn’t get away without cooking something. I decided to attempt my mother’s old fashioned banana pudding. There is no boxed pudding involved, and it has to be topped with the highest meringue possible. Most importantly, the bananas must be very, very ripe. These simple rules make all the difference. I hope you enjoy this recipe, and may our community continue to celebrate the beautiful and intriguing differences that truly make Canton the best city to live, work and play in the Southeast. 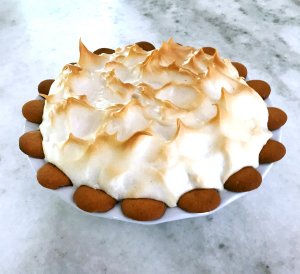 Directions
Preheat oven to 325 degrees.
Combine flour, sugar and salt in a heavy saucepan.
Lightly beat egg yolks and whisk with milk then add the egg and milk mixture to the dry ingredients in heavy saucepan. Cook over medium low heat, stirring constantly, until thickened and smooth. Remove saucepan from heat and stir in vanilla.
Crush or puree one to two very ripe bananas until smooth, then combine well with custard mixture.
To build the banana pudding, place a single layer of vanilla wafers on the bottom of a 13×9 baking dish or other similar container.
Slice remaining bananas, and place a layer on top of wafers.
Pour 1/3 of custard over first layer of wafers and bananas.
Repeat layering two more times until all of the custard has been used.

Meringue
Whip egg whites with a mixer at high speed.
Once egg whites begin to foam, add cream of tartar and gradually add sugar one tablespoon at a time.
Continue whipping until sugar is dissolved and stiff peaks have formed.
Add vanilla and whip until thoroughly combined.
Spread meringue over pudding, making sure to spread to the edges of the dish.
Line edge of pudding with wafers to decorate like Mama always did.
Bake for 20-25 minutes, or until the meringue is lightly browned.
Serve warm or chilled overnight. The next day is the best, if you have patience!