Recently, a poll was conducted by the Atlanta Regional Commission that asked, among other things, what issues were most important to Cherokee County citizens. Transportation drew 35 percent of the vote. Even though 60 percent of respondents did not mention mass transit as a way of addressing the issue, those at the commission heralded the 40 percent who thought transit was a fix as a boon to the argument that light rail is wanted by Cherokee County residents. The problem, of course, is that they ignored the 60 percent that said no.

Mass transit, of course, can mean busses in combination with rail. And, while there are some advocates for transit who will argue for additional bus service, what they are really advocating  is additional light rail expansion.

Rail is expensive to build, costing $80 million to $100 million per mile. Then, add on the annual maintenance and operations cost, and you start to wonder if it is the wisest way to spend our transportation dollars. 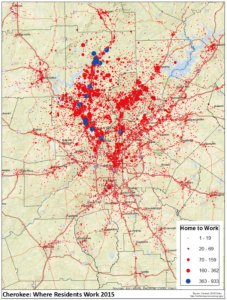 It isn’t the initial capital required to expand the rail system that is the problem. Population density is the real reason why rail will not work in metro Atlanta. In 2011, the Institute of Transportation Studies at the University of California, Berkeley determined that, in order for light rail to be cost-effective, population density would need to be close to 30 people per acre. Metro Atlanta is one of the least dense cities in the world. In fact, we come in right at one person per acre in our metro region. Also, here in Cherokee County, we travel all over the northern part of the state to go to work. Here is a heat map that shows where people go to work when they leave Cherokee County; it looks like a Jackson Pollack painting.

Simply put, light rail expansion would be an economic blunder.

Further, rail is a 20th century solution to our 21st century problem. Those who advocate for expanded rail lack the vision that technology will bring to the table. Some technologists claim that self-driving cars will increase throughput on our current roadways 400 percent. New companies are researching solutions that would use flying drones. Some believe a child born today never will drive their own car. Within a decade, transportation could be unrecognizable to us today.

With all due respect to the folks in Atlanta who commissioned the above-mentioned poll, they haven’t listened to the real concerns about transportation in Cherokee County. When my constituents tell me about their struggles getting to and from work, it largely has to do with unchecked and unplanned growth at the local level. Getting a move-on with projects like the Bells Ferry Bridge replacement at Little River and widening State Highway 140 are what is truly needed here.

We will get to work on those projects and focus on how best to spend your hard-earned tax dollars in a way that actually will improve your quality of life.