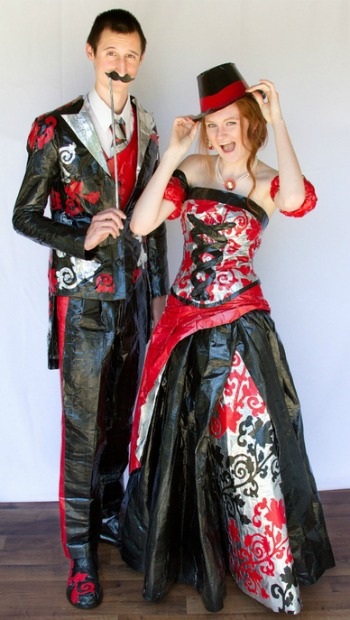 UPDATE: Caden and Ashton won the Grand Prize in the national contest and each will receive a $5,000 scholarship.  Sequoyah High School will also receive $5,000.

As we originally reported in the May print edition of Sixes Living Magazine, Caden Kluge didn’t have to worry that someone else would be wearing the same dress at her prom. The recent Sequoyah graduate made her own gown and the tux that her friend Ashton Woolen wore – out of duct tape, just like a challenge from TV’s Project Runway.

Creating the outfits doubled as her senior project and an entry for a national competition, the Duck brand duct tape Stuck at Prom contest. Kaden has now been named one of the 10 finalists and both she and Ashton have earned $500 for making it to the finals. The winner and their partner, to be announced later this month, will each receive a $5,000 scholarship. Second place contestants receive $3,000, third place receives $2,000, PLUS the winner’s school will receive a matching amount.

Caden created her two-piece dress and Ashton’s tie and vest from scratch. Her bodice has a zipper in the back. She bought Ashton’s jacket and pants from a thrift store, and covered them with duct tape as she cut away the cloth material. The jacket has tails, which she covered with a design of tiny swirls that match her dress. Their shoes are thrift store purchases covered in duct tape.

“The jacket with tails is one of my favorite pieces. The most intricate part is all the flower designs that are duct-tape stickers. I made the pattern, traced it onto wax paper and spent countless hours cutting out the tiny swirls.” Caden used 61 rolls of duct tape, most of which was donated by a local building supply company. She spent 243 hours and 15 minutes on the project, took 65 photos which she displayed on her blog (stuckonapromdress.wordpress.com), and spent $200. The value of the donated tape was $500.

Designing costumes is something Caden said she has always enjoyed. Despite the intensity of this project, she said the end result was worth it and she’d do it again, even knowing what she knows now.

Caden will be attending Emory, and wants to study computer science. “Considering how much stress designing projects are, I prefer to keep them as hobbies rather than a career.” Her style partner Ashton plans to attend Chattahoochee Tech and study filmography.