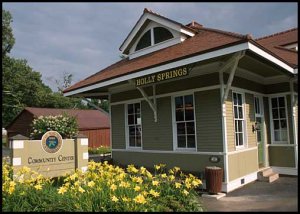 Just like all of you, elected officials and staff in the city of Holly Springs take the opportunity that the new year brings to look back at all of the good things the past year brought us, and to look forward to what the coming days will bring.

In 2017, many projects that have been in the works for years came to fruition. The city of Holly Springs and the Holly Springs Downtown Development Authority entered into a development and management agreement with Stonecrest Homes GA LLC in November for the Holly Springs Town Center Project (TCP). The agreement provides a 90-day due-diligence period for Stonecrest that expires on Jan. 31. During this period, Stonecrest will work with Southeastern Engineering Inc. to complete site engineering and present a project budget to the City Council and the Downtown Development Authority for the development of the Town Center.

City officials knew that redevelopment of the downtown area would mean that some traffic mitigation efforts would be needed. A northbound travel lane has been added along Holly Springs Parkway, on the north side of the city; Rickman Industrial Drive was realigned; and turn lanes have been added at its entrance and onto Hickory Road from Holly Springs Parkway.

Sidewalks and lampposts have been added throughout Holly Springs to improve pedestrian connectivity. There also are plans to construct a downtown bypass which, at completion, will divert traffic from Hickory Road, near the TCP, to Exit 14 off I-575.

Many new projects will begin in 2018. WellStar Health System plans to break ground on its new health park in the spring, with completion in the summer of 2019. Upon completion, the new health park will provide more than 100,000 square feet of medical offices, including physician offices, medical imaging, urgent care, cardiac diagnostics and other services.

Currently, several projects are underway near the intersection of Holly Springs Parkway and Sixes Road. Construction started on the Sixes Ridge apartment complex in November. The project, situated between Holly Springs Parkway, Rabbit Hill Road and I-575, will include 340 luxury rental units north of Home Depot.

Construction is nearing completion for the new Dairy Queen Grill and Chill near the entrance of Home Depot. Construction also has ramped up on Holly Springs Medical Office Building, the new OneLife Fitness Center between Home Depot and the Northside.

From the city of Holly Springs, we wish you all a healthy and prosperous 2018!