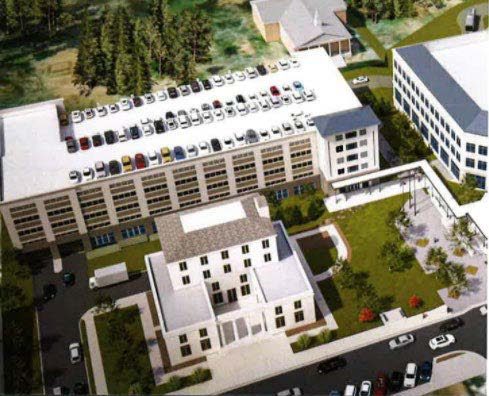 File this one under, “Nothing is easy.”

The county needs to expand the Justice Center in downtown Canton. It was built a little more than 25 years ago, to meet the space needs of the courts. Now, it’s bursting at the seams.

The expansion will take up space currently used for parking, which already is inadequate. So, the first step is to expand the parking. For years, we thought we could add a big parking deck on county-owned property behind the current small deck, which then would be torn down, to allow for expansion of the building. But, the architects hired to evaluate the site and lay out the new plan told us that wouldn’t work. The deep ravine and stream on the property make it virtually impossible to use, adding millions of dollars to the cost. And, putting the parking in the back of the complex is contrary to the goal of improving court security by routing everyone into the building though a single secured main entrance.

The architects’ plan is to put a large deck on the current parking lot behind the historic courthouse, which is the best-functioning solution for the courts. We began showing people that plan in January. Since then, there’s been growing opposition to it. Advocates for historic preservation and Canton’s visual appeal see it as detracting from the beauty of the downtown square and, especially, the courthouse. Advocates for the historic cemetery behind the proposed site object to the deck towering over the cemetery, and cutting it off from the square, visually and physically. To make the deck fit on the site, it’s designed so that all vehicular traffic to the cemetery would have to drive through the deck. We might be able to adjust the plan to retain an open-air driveway, but that creates other negatives, and it doesn’t solve the other issues.

In the face of growing opposition, the county has put the plans on hold, to consider all available options. We’ve convened a committee of interested parties to help, including the city of Canton.

We potentially could shift the deck partly onto a privately owned parking lot to the west. But, that property isn’t for sale, and would be very difficult to acquire. Also, it would help only a little.
A more viable option could be to purchase an adjacent piece of property, where a small apartment complex is located, and put the deck there. That site would function acceptably, and the overall cost would be moderately higher than the proposed site. However, the city of Canton expressed concerns with that option, partly because it would displace residents and eliminate a block of affordable housing. Solutions to resolve those concerns are being explored. That site also wouldn’t solve all the problems, but it might end up being the best available option, so stay tuned.

As always, I’m interested in your thoughts about this and other county issues. Email me at hjohnston@cherokeega.com.

– Harry Johnston is chairman of the Cherokee County Board of Commissioners. He’s a retired CPA and accounting manager, and a former
district commissioner.