You’re probably familiar with the saying “something old, something new, something borrowed, something blue.” Do you know the origins of this bridal tradition?

In America, we often leave out the last part of the adage: “and a silver sixpence in her shoe.” That last line suggests that the saying originated in Britain, where the silver coin worth six pennies was minted between 1551 and 1967. According to an old Scottish custom, if the groom puts a silver coin under his foot—especially the left one—he would have good luck. For brides or grooms, the coin represented financial security and wealth.

The bride who carries the sixpence and other items listed in the saying is assured of prosperity and a happy marriage. “Something old” is a symbol of family and the past, of carrying history forward through your own marriage. “Something new” symbolizes the new life ahead for the bride and groom. Carrying “something borrowed” from another happy bride will bring borrowed happiness, as well as the assurance that friends and family will support you in your new, married life.

In Roman times, brides wore blue to symbolize fidelity and modesty. The Virgin Mary is typically depicted wearing blue, linking the color with her virginity and purity. Blue continued to be considered symbolic of faithfulness into the Victorian era, when a popular proverb claimed “marry in blue, lover be true.”

Our new exhibit at the Cherokee County History Museum— “Old, New, Borrowed, Blue: What We Wore Walking down the Aisle”—showcases not only wedding dresses from women around the county across a 90-year span, but also their “old” and “borrowed” items.

In 1959, Mary Beavers married Bill Johnston at Macedonia Baptist Church. The next year, her sister Sara married Hines Manous in the same church, wearing the same dress. The dress made a return trip down the aisle at Macedonia in 1963, worn by Katherine Johnson when she married Robert Young. 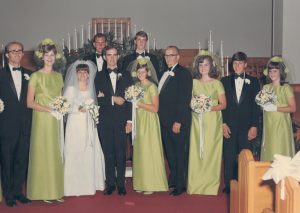 Sylvia Carroll married fellow teacher Bill Teasley in 1966, in her hometown of Hattiesburg, Miss., In 1970, their colleague Evelyn Hester wore Sylvia’s dress when she wed Sonny Carmichael at Mt. Zion Baptist Church in Canton.
In 1975, James Wheeler purchased a Belgian lace veil on a business trip for the Canton Textile Mill. The veil has (so far) been worn by his daughters Rebecca and Carole Ann, and his granddaughters, Ann and Audrey.
Come see the wedding traditions of Cherokee County in “Old, New, Borrowed, Blue,” on display until Oct. 29.