Tim Cavender of Ball Ground, will soon join the ranks of the International Santa Claus Hall of Fame. In an effort to celebrate, study, preserve, and document the contributions to the Legend of Santa Claus, the Hall of Fame has been welcoming inductees since 2010. 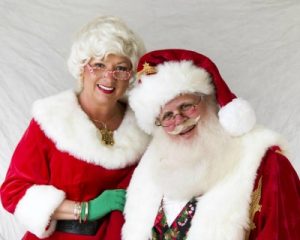 Donning the red suit, beard, and glasses since the age of 14, Tim Cavender has helped make spirits bright for countless children. Tim’s wife, Pam, has been by his side as Mrs. Claus over the years. Appearing at the Georgia Governor’s Mansion for the last six years, volunteering time at the Grady Hospital Burn Center to visit patients, and sharing the joy of Christmas for a variety of non-profits has made Tim Cavender a local legend when it comes to spreading Christmas cheer. One of the highlights of his career that sticks out is when a young girl told Santa that her wish for Christmas was for her dad, a soldier in Afghanistan, to come home. Santa Tim was honored to have the opportunity a few days after learning of her wish to be there in person as her dad greeted her.

We are proud to know that one of our local celebrities will soon be inducted into the International Santa Claus Hall of Fame for all that he has contributed to our community over the years! His official induction is to take place this coming April in Albion, NY. Please join us on congratulating Mr. Cavender for all of his passion that he puts into being our very own Cherokee County Santa Claus and making Christmas that much more brighter in Woodstock and beyond! Read the full story on page 10 of the Sixes Living January edition