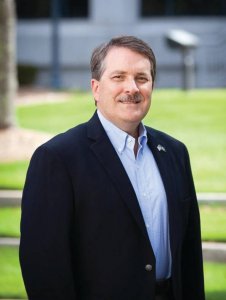 A young man from Arkansas made his way to Georgia nearly 30 years ago to pursue a career in public administration. Little did he know he would lead one of Georgia’s fastest growing counties as it transitioned from a bedroom community to a destination location, and went through a population boom and the Great Recession.

After serving in the U.S. Navy and graduating from the University of Arkansas, Cherokee County Manager Jerry Cooper began his work in public administration in Fayetteville, Arkansas, in 1988, later relocating to Newnan, Georgia. Just a few years later, Cooper would take on a leadership position in Woodstock, before his final move to Cherokee County, where he has had a successful career as county manager.

When Cooper was selected to lead Cherokee County in 2001, he never imagined it would be the job from which he retired.

“Back then, I did not realize I would have the opportunity to serve as county manager for 20 years, especially considering the average tenure of a manager is seven to eight years,” Cooper said. “I have had the fortune of serving the best commissioners and employees in the country — each of us working together with community leaders to make this county a great place to live and raise children, work and play.”

Over the past 20 years, Cherokee County has evolved from a quiet suburban county to a destination for quality family living, corporate relocation and entertainment.

That’s due in large part to Cooper’s leadership.

Effective leadership allowed the county to grow responsibly, while maintaining its identity of a strong community with hospitality.

Cooper was not immune to the challenges of leading a county in both good times and bad, but his leadership and fiscal responsibility allowed Cherokee to weather the Great Recession, double parks and green space, enhance fire and emergency services, achieve exceptional public safety and the lowest crime rate in the region, while lowering the tax burden on citizens to the lowest in the metro area.

“Although a challenge to manage, the growth has provided us with many opportunities to make lives better for our citizens,” he said.

Chairman Harry Johnston, who has served on the Board of Commissioners for many years, has witnessed Cooper’s work firsthand.

“Cherokee County clearly has the best combination of excellent services and low taxes in Georgia. No other county even comes close,” Johnston said. “Jerry Cooper is the principal architect of that exceptional value, through his masterful financial management over the past 20 years.”

While leadership played a key role in Cherokee County’s success, Cooper is quick to credit those he served alongside, including elected officials, community leaders and county staff.

“The most rewarding career accomplishment is the opportunity I have had to work with so many wonderful people, and (I am) so proud of what we have achieved together,” Cooper said.

As Cherokee County prepares for a transition in leadership, Cooper encourages whomever fills his role always to remain humble, commit to honesty and trustworthiness, and to lead by example.

“I have learned a great deal over the last 20 years, and I encourage the next county manager to surround yourself with great leaders, build strong relationships, work closely with the Board of Commissioners and other elected officials, invest in others, work hard, listen, and always be willing to learn,” he said, adding it’s also important to be of service to the community in volunteer roles. “Commit to helping children and families in need, and be part of the great service organizations in our county.”

Cooper will retire at the end of May and looks forward to playing golf, vacationing with his wife, Sherry, continuing his volunteer efforts to help children and families in need, and consulting.

“I have so much to be thankful for in my career and personal life,” he said. “I attribute my success to God’s grace, a loving and supportive wife, family and friends, great employees, and the opportunity to work with the best commissioners and elected officials in the entire state of Georgia.”

– Erika Neldner is the communications director for Cherokee County. Erika, married with two boys, has lived and worked in Cherokee County since 2005.