It was just a typical day, when Bob Chester happened to glance at a car in the parking lot and noticed an emblem with the name of his hometown. He did a little sleuthing and discovered the car was owned by a resident, Betty Hickcox.

Glassboro, N.J., is more than 800 miles from Canton, and, it being a very small world, two adventurous souls from the same small town made their way to The Lodge at BridgeMill some 70 years later.

Although they didn’t know each other, they both attended the same high school.

“She wouldn’t have noticed me back then; I was a country boy, and she lived in town. Besides, no senior girl would have talked to a sophomore,” Bob said.

After leaving Glassboro High School, they both enlisted in the U.S. Navy in 1944. Betty took an assignment in Washington, D.C., because, she said, “no one else wanted it.” (Saks 5th Avenue came out to measure her for uniforms.)

After World War II ended, she married an engineer from the Army and moved to New York. Bob became a Gunner’s Mate on the USS Ludlow. In 1947, he married his sweetheart, who was lovingly waiting for him to return home. In time, Betty and Bob both raised families and, years later, found themselves migrating south to be close to their grown children. 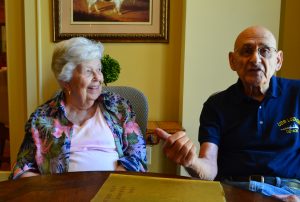 Both Betty and Bob separately settled in at The Lodge and have active schedules. They see each other occasionally, in the halls or at activities. They also get to catch up on what’s happening in their hometown, thanks to Bob’s newspaper subscription. He is still eager to share the news from home.