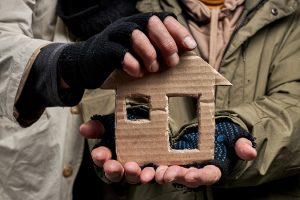 A team of local nonprofit agencies has been working with the county to establish a homeless shelter. Although there is a need, there’s no short-term homeless shelter in Cherokee County now. Area nonprofits have funds for hotel-motel vouchers for up to 30 days, but it’s expensive, and the funds aren’t nearly enough to meet the need.

The school system has identified around 250 kids who don’t have homes, and most are in single-mother families. Some women and children are staying temporarily with friends or relatives, and some are in extended-stay motels. But, some actually are living in cars or squatting in makeshift structures. It’s harder to count homeless men. The last official count was approximately 60 unsheltered, but we know there are more than that.

To help meet this need, there is an opportunity to repurpose the former Tippens Elementary facility in the north Canton mill village. The school system no longer uses it, but has kept it maintained. It has 12 classrooms in the main building, and five more in an annex, that each could make one to two efficiency apartments. The former gym could serve the shelter and surrounding community, and provide additional overnight shelter space in extreme cold weather.

The project team has recommended that this shelter serve women and children, partly because the surrounding community will be more accepting of them. Additionally, except for emergency cold-weather situations, the team doesn’t believe it will work well to mix men and women and children at the same site. But, if the shelter can meet a large portion of the need among women and children, the hotel/motel voucher program can help more men.

The program envisioned would include housing for up to 90 days, with day care to allow women to work, as well as support services to help them get into independent housing. The operating cost is expected to be more than $1 million per year. Funds from the federal American Rescue Plan Act (ARPA) can cover that cost through at least 2024, and possibly through 2026. The shelter would need other grants and private donations to fund it for the longer term, and the team believes that can be done.

The county has earmarked some local funds to buy the facility and start the needed adaptation, but more is needed. There are plenty of ARPA funds available, but it’s still unclear whether they can be used for capital costs, such as building renovations. We hope to know that later this year. If they can, the initial financial hurdles mostly will be met.

There are still concerns about community and public acceptance of a shelter program, and there will be other challenges. But, the available facility and the ARPA funds to get the shelter started make this a real possibility.

As always, I’m interested in your feedback about this or other county topics. Email me at hjohnston@cherokeega.com.

– Harry Johnston,  chairman of the Cherokee County Board of Commissioners. He’s a retired CPA and accounting manager, and a former
district commissioner.