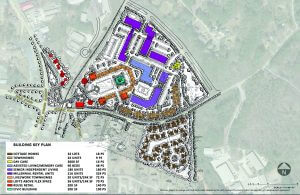 City officials have received an overwhelming amount of positive feedback since news has spread about the city’s Town Center Project (TCP).  The most frequently asked questions are answered  on these pages.

Q:  What will be included in the TCP?
A:  The development will include lofts, townhomes, cottage homes, retail and office space, city hall and an event green.

Q:  What kind of retail shops will be part of the project?
A:  There is not a specific list of retail businesses for the TCP yet.  A study funded by the city specifically noted that there were opportunity gaps for restaurants, clothing stores and general merchandise stores in downtown.

Q:  What is the anticipated start and completion date?
A:  While there is not a completion date yet, city officials hope to have a master developer in place by the end of 2016, and break ground in 2017.

Q:  Since residents will not see an increase in taxes, how will the
project be funded?
A:  Funding will come from private-sector developers pursuant to a development agreement. The City of Holly Springs has proposed using a Tax Allocation District (TAD) to fund the construction of public sector infrastructure on the site.

Q:  What are the plans to address traffic congestion problems in the
downtown area?
A:  The city is currently advertising for proposals for preliminary engineering for the Industrial Connector that will divert traffic from Hickory Road to Holly Springs Parkway.  The city also will be making improvements to the intersection of Holly Springs Parkway and Hickory Road. Motorists can expect to see construction beginning on this project as early as the first quarter of 2017.