Many of us remember that, almost 20 years ago, plans for a new Northern Arc highway along the Highway 20 corridor were canceled. Some look back and say that was a mistake, but there’s no denying that opposition to that road was overwhelming at the time. It was a key factor in the governor’s race that effectively turned Georgia from blue to red. That cancellation required a full restart on plans for moving traffic east to west just north of metro Atlanta.

About five years ago, Georgia increased its fuel tax to generate substantial new funds for roads. With that money coming in, GDOT proposed a series of alternative designs to expand Highway 20. The alternatives mostly involved bypasses around the major intersections at the centers of the communities along the road. The public voice was clear again. A large majority said they didn’t want bypasses. They wanted the road expanded entirely on its current route.

About three years ago, GDOT presented its initial design for a six-lane, median-divided highway on the current route, and began acquisition of the right-of-way needed for the widening. Some people argued that only four lanes are needed at this point, and that a median will inconvenience people entering the highway from side roads that don’t have traffic signals. But, GDOT held firm on the scale of its design.

As construction is about to begin, GDOT has released a virtual town hall meeting with project schedule information and animated videos to show details of the design. You can see it at www.dot.ga.gov/BS/Projects/SpecialProjects/SR20Improvements/I575NCorners.

The animation depicts traveling eastward along the road, in four segments beginning at these points:
• I-575, Exit 19
• Water Tank Road
• Just East of Highway 372
• Post Road in Forsyth County

The design shows no new traffic signals, but all existing signals will be retained. With just one exception that I see, left-turning traffic entering the highway at unsignalized points will have to start by turning right and proceeding to the nearest U-turn point. Left turns off the highway will be allowed at about half the unsignalized intersections. Others will require continuing past the side road to a U-turn point. Most of the allowed left-turn points also will allow U-turns, and there will be other U-turn points not at side roads. Some of the U-turn points will have extra turning width, to allow large trucks to navigate them.

– Harry Johnston is chairman of the Cherokee County Board of Commissioners. 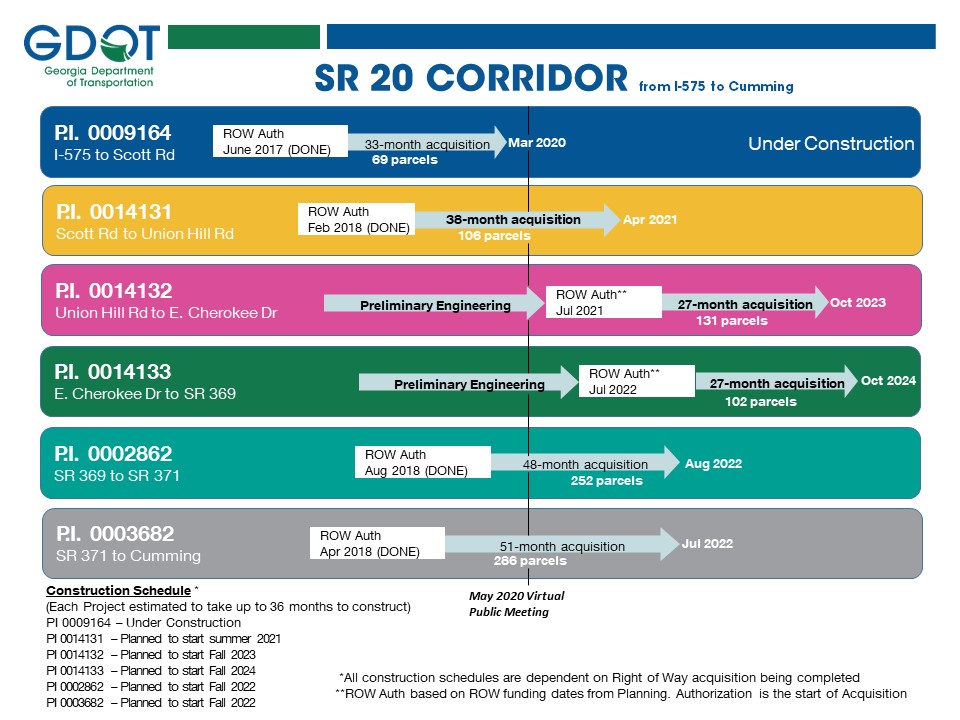