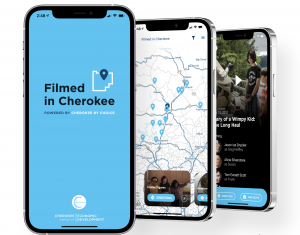 We all love a good story. Whether it is an action-packed drama or an indie thriller, film brings stories to life. But, what about the stories behind the camera: where scenes were filmed; where actors dined while in town; relationships forged between the film crew and community; and why Cherokee continues to be a top filming location?

All these answers can be found in your pocket. Launched by the Cherokee Office of Economic Development (COED) in partnership with Black Airplane, the newly released Filmed in Cherokee app is your behind-the-scenes guide to discovering fan-favorite film locations across the county. The free app features insider stories, on-set photos and key details about why each public location was chosen.

Curious about Tom Cruise’s friendship with a local restaurateur while filming “American Made,” or why film projects like the Disney+ Christmas film “Noelle,” starring Anna Kendrick and Shirley MacLaine, made a landing in our community? The Filmed in Cherokee app answers the who, what, why and how.

The perfect day trip for local film enthusiasts, the custom-built app includes an interactive map that allows users to navigate from one location to another — all while enjoying local areas of interest. Whether you dine at the Ball Ground Burger Bus like Disney+’s “Timmy Failure,” take in the views at “Ozark’s” Blue Cat Lodge, or ride your mountain bike at Blankets Creek, like the stars of “The Resident,” there is a location for the whole family to enjoy.

Plan to make a weekend of it — enjoy one-of-a-kind shopping and dining, explore outdoor pursuits, and even take in a local brewery along the way. And, don’t forget to chat with the people and businesses behind each location.

While visiting the locations of these locally filmed productions, be sure to snap a selfie and share using the hashtag, #filmedincherokee:
• “American Made”
• “Billy Lynn’s Long Halftime Walk”
• “Champion”
• “Diary of a Wimpy Kid: The Long Haul”
• “Doctor Sleep”
• “Dolly Parton’s Heartstrings”
• “Hidden Figures”
• “MacGyver”
• “Noelle”
• “Ozark”
• “Timmy Failure: Mistakes Were Made”
• “The Founder”
• “The Outsider”
• “The Resident”

If you are wondering how your property could be featured in the next major motion picture, or how to get involved in Cherokee’s film scene, the app’s got you covered there, too. Check out the “Get Involved” section to list your property as “Camera Ready.” There, you will find tips and instructions provided by the Georgia Film Office for listing your property on the Reel Scout database. Who knows, maybe your property will be the next “filmed in Cherokee” success story.

Get your all-access pass to Cherokee’s booming film industry by downloading the Filmed in Cherokee app for free on Google Play or through the Apple App Store.

For more information on filming in Cherokee, visit cherokeega.org.

– The Cherokee Office of Economic Development is the leading organization for business and film recruitment and industry retention & expansion.