People often ask me why we don’t just shut down the growth and development in our county. They moved here to get away from overdevelopment, and don’t want it to happen here. The answer is, we can’t shut it all down, even if we wanted to. Property owners legally are entitled to a reasonable economic use of their property. Any regulation of land use and development must be done through a systematic process.

But, Cherokee recognized the need for growth management earlier than most counties, and we’ve handled it better than most. We’re positioned to be a rare county located this close to a major city that can sustain a comfortable, small-town lifestyle over the long run. It’s a truly precious opportunity.

The roots of the responsible growth movement were planted in the early 1990s, but it took until 2008 to gain a consistent 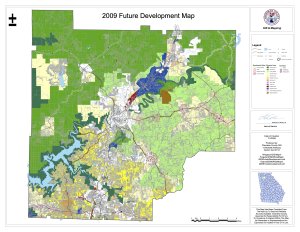 majority on the Board of Commissioners. Since then, we’ve brought the average annual population growth down countywide from about 5% to about 2%. The cities manage growth inside their borders, and can grow those borders through annexation. They still have ambitions to grow significantly, but are increasingly willing to work with the county on growth management. Growth in the cities can be good, as long as it doesn’t consume the entire county.

We manage growth and development through land-use planning and zoning. In Georgia, cities and counties must have land-use plans and update them every five years. Cherokee will be starting an update later this year. Everyone will be invited to have input. All plan updates must pass a legal review and be deemed reasonable by the Georgia Department of Community Affairs.

The current plan for unincorporated areas calls for relatively intense development along the major highway corridors in south Cherokee, where that development pattern already is fully established. That includes commercial use and some multifamily housing. The plan calls for lower-impact development in the large “horseshoe” area that begins north of Allatoona Lake, on the west side, and continues around Canton’s north side and back down to the Arnold Mill Road corridor, on the east side.

In those areas, the highway corridors are planned for lighter commercial uses and medium-density residential use, with intense commercial development only at nodes in the centers of the traditional rural communities. In all areas, the plan calls for gradual, lower-impact development moving away from the highway corridors and nodes. Literally half of the county’s land area is planned for rural density, not to exceed one home per two acres.

You can view the current land-use map at www.cherokeega.com. Click on Departments, then GIS, then Maps, then Future Development Map.

Ultimately, the allowed use of a property is determined by its zoning. By law, zoning decisions must consider the land-use plan. But, they also must consider existing actual development adjacent to and near a property being rezoned. Sometimes, a compromise is necessary to achieve a reasonable step-down between an intense existing development and a lower-impact land-use plan for the area.

– Harry Johnston is chairman of the Cherokee County Board of Commissioners. He’s a retired CPA and accounting manager, and a former district commissioner. Email him at hjohnston@cherokeega.com.