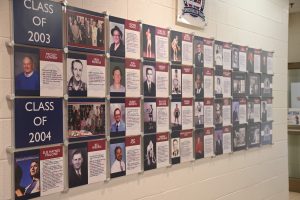 Showcasing the best athletes, coaches and businessmen and women since 2003.

Visit any community across the United States and ask the locals how much they value sports in their city or town, and you will find great attention is given to local athletes and their accomplishments. Cherokee County is no exception, but it offers something many communities do not: a sports hall of fame.

The idea for a local sports hall of fame began with Cecil Pruett, a former basketball standout on his Alabama high school team. Marvin Satterfield and Bill Groover, basketball players at the old Canton High School, often took Pruett to sporting events at the University of Georgia. During these trips, the men would talk about the accomplishments of Cherokee County athletes.

In 2001, Pruett returned to Alabama for the induction of his former high school basketball coach into the Cullman County Sports Hall of Fame. (Pruett was inducted in 2010 for his basketball career.) Pruett, who served as Canton mayor 1995-2007, became interested in creating a hall of fame for Cherokee County. After much discussion and networking for support, the Cherokee County Sports Hall of Fame, modeled after the one Pruett saw in Alabama, was created as a nonprofit.

The first inductees were installed in 2003. Since that time, the number has risen to 104 talented male and female athletes, coaches and business owners representing baseball, basketball, football, wrestling and golf, among other sports. Many athletes achieved statewide or national attention and accolades, including Olympic-level competition.

When the G. Cecil Pruett Community Center Family YMCA was rebuilt, hall of fame board members worked to include an exhibit in the new facility, located at 151 Waleska St. in Canton. For the complete history and information about the hall of famers, visit www.cchof.net.

LaShonda Stephens Tucker. A member of the Sequoyah Lady Chiefs in 1992-96, Tucker was the Class AAAA Player of the Year in 1996, appeared in four straight state semifinals, and won two state championships. She won a pair of national championships at the University of Tennessee and was a starter on the 1998 national championship team that went 39-0.

Danielle Donehew. A member of the Sequoyah Lady Chiefs in 1992-96, Donehew appeared in four straight state semifinals and won two state championships. She played at Georgia Tech before joining the staff at Tennessee. Donehew served in executive roles with the Big East Conference and the WNBA’s Atlanta Dream and currently serves as executive director of the Women’s Basketball Coaches Association.

Matt Moore. Moore was a four-year starting football player at Cherokee High School and a three-year starter at Valdosta State. He has coached at West Virginia and served as head coach at Pickens and North Gwinnett high schools, as well as a college assistant at Texas Tech, Middle Tennessee State and Louisiana Tech.

Mickey Swims. Swims is the second inductee in the contributor category. Swims has owned and operated Woodstock’s Dixie Speedway for 42 years. He also runs Rome Speedway, which he has owned since 1969. Swims is a member of the Georgia Racing and National Dirt Late Model halls of fame.

The selection process for inductees begins with the submission of applications, due no later than Dec. 31. Details of the criteria for applying are on the website, along with the printable application and instructions. Once the Hall of Fame board of directors receives the application, materials are sent to the committee, which reads the applications and chooses the new inductees.

The board has a subcommittee that uses established criteria to evaluate each nominee based on achievements. Once reviewed by the subcommittee, the top 25% of the nomination results are submitted to the board of directors for a vote by the entire board. This vote usually takes place at the end of January, and inductees are notified.

The induction ceremony/banquet usually takes place in April or May. The board reserves the right to postpone the banquet if COVID-19 is still an active concern.

Cindy Ely Angelich
A basketball standout, Angelich achieved Cherokee High School All State status in 1974, as well as All-Region in ’75. She also was part of the 1976 State Championship, All Region and All State teams, and was named State Runner-up, All Region and All State in ’77. She received a basketball scholarship from the University of Tennessee and was part of Final Four AIAW teams in 1979-81. In 1984, Angelich was a member of the USA All-Stars Olympic Exhibition Series Team.

Kyle Owen
A member of the Cherokee High School golf team in 1988-1990, and three-time letterman and MVP, Owen went on to be a three-time letterman and MVP at Kennesaw State University. He turned pro in 1997, and won four professional tournaments, including a national Pro-Pro tournament against Bubba Watson, Bill Daly and others. He was inducted into the Kennesaw State University Athletic Hall of Fame in 2012. Named the Georgia PGA player of the year in 2017, Owen is the PGA head golf professional at St. Ives Country Club.