When the city of Canton was building its Roadmap for Success, the tenet of Connecting Citizens to Parks & Recreation already was taking shape. The nine parks and recreation areas in Canton were being used by residents and visitors year-round, and more people were discovering them every day. So, what else did the city have in mind for this tenet?

Improvements
In September, the city kicked off a $4.3 million project to update Harmon Park and bring it up to the standards of excellence of the newer green spaces. Improvements to the park will include the construction of the mini-pitch soccer field, as well as a new pavilion, resurfaced basketball court, new batting cages, baseball field upgrades, connecting sidewalks, a continuous park drive and additional parking.

“Harmon Park is a focus area for the city,” Assistant City Manager Nathan Ingram said. “The city aims to construct a re-imagined park that will offer a better overall experience for its citizens, be more inclusive and inviting to all groups, and be an integral part of the overall goal for an interconnected park/trail system throughout the city of Canton.”

Long-term goals and future additions to the park will include public art installations by the Canton Cultural Arts Commission, riverside landscaping, and a bridge crossing and trail connection to the Canton’s three larger parks.

Expansions
You most likely noticed construction that took place last year through the center of Heritage Park, which currently continues under Waleska Street and along the Etowah River. This is the extension of the city sewer lines to the Water Pollution Control Plant at Boling Park. Part of that project includes a trail extension leading from Heritage to Boling.

Once complete, the fully paved system of interconnected sidewalks will take park-goers from Etowah River Park to Heritage to Boling, or vice versa, without having to cross any major roadways and — for runners — a complete 10K without ever passing the same spot!

Additions
Heritage Park has seen many additions to its offerings, with a few that are coming soon. Through the vision and planning of Adam Dodson, Canton’s parks and recreation manager, a plyometric gym opened this time last year. Located at the park’s center edge and adjacent to the G. Cecil Pruett YMCA, this unique gym incorporates exercises in which muscles exert maximum force in short intervals of time. On the way for Heritage Park is the addition of a new inclusive playground and much-needed public restrooms.

On the Horizon
Earlier this year, the city purchased 5 acres in south Canton to further expand its parks and recreation offerings. Canton’s 10th park likely will undergo planning later this year, and include an opportunity for public input.

And, one of the most-requested projects by citizens may be on its way as early as next year: a new dog park! Planning for this park for our furry friends will begin in 2023, and will be incorporated into Canton’s plan for use of special-purpose local-option sales tax funds. 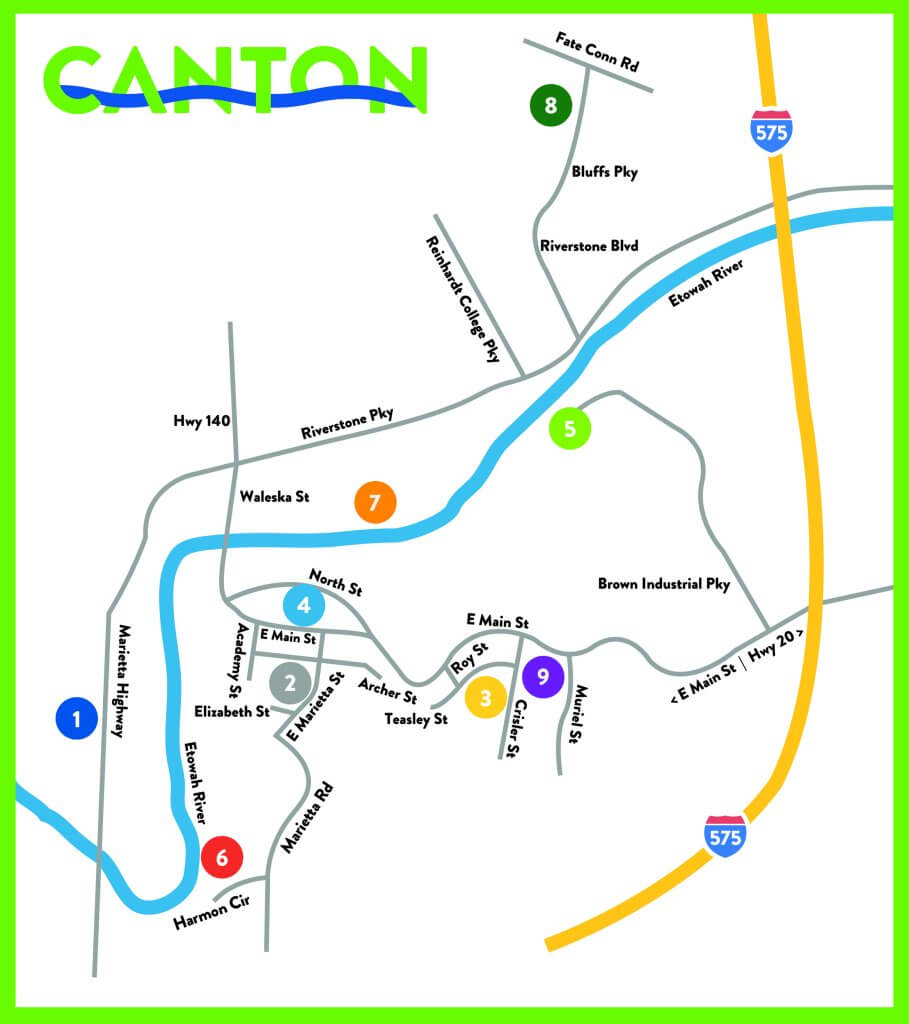 All parks and sites are open from dawn until dusk, other than Hickory Log Creek Reservoir, which is open 7 a.m.-7 p.m., and 7 a.m.-8 p.m. between Memorial Day and Labor Day.