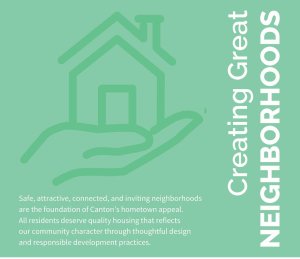 Creating great neighborhoods is one of Canton’s eight tenets in its Roadmap for Success. While the recent Canton Housing Study indicated the need to add multiple housing types, affordable housing seems to be the most talked about topic when it comes to housing discussions. With skyrocketing home prices and rent, and increasing mortgage interest rates, there seems to be a perfect storm brewing.

One of the obstacles to creating affordable housing is the stigma associated with it. When some hear the words “affordable housing,” they tend to think negatively and associate it with circumstances such as a decline in property values, increased crime, unkempt buildings and other notions that would be an overall detriment to communities.

“We owe it to our residents to encourage and incentivize developers to develop affordable housing in Canton,” said Shawn Tolan, Councilor of Ward 2 and Housing Committee chair. “The Low-Income Housing Tax Credit Program (LIHTC) is a federal tax program that incentivizes private companies to invest in new construction development and the preservation of existing affordable housing for low-income households.”

The LIHTC program’s purpose is to create more affordable housing, but the vehicle that brings that purpose to life is the development community. Without the subsidy, these investments would not be financially feasible for developers. Total development costs are similar to market-rate developments, and the LIHTC allows developers to build the exceptional quality housing that residents deserve, while also being able to offer affordable rent.

“To produce affordable housing that is high quality and safe, all parties involved must believe in the necessity of creating opportunities for households that are rent-burdened,” Tolan said. “Recognizing that housing is dignity, and that people deserve a place to call home they can be proud to live in, is how great communities get built.”

There are ways that developing affordable housing also can be important to communities in the short term, by enhancing the quality of life for rent-burdened households. Many affordable-housing developers offer programs at their properties that go beyond what an affordable home can provide. Programs centered around economic mobility, financial literacy, expanding educational opportunity, feeding the less fortunate, and engaging with local community organizations are all examples of different areas of focus that affordable-housing developers have emphasized to add benefit to the communities they serve.

“That benefit also extends to senior populations, who often are forgotten when we think about those who need access to affordable housing,” said Tolan, who recently started the Facebook group, Cherokee Senior Roommate Connect, which is dedicated to finding affordable housing for seniors. “While there is still demand for assisted-living facilities, there are several reasons why certain seniors want to transition out of their single-family home into something smaller and more manageable.”

As an example, Dominium, a residential developer, recently came before the City Council and, after receiving feedback on changes that were needed, the council approved a 251-unit affordable senior apartment project in the Bluffs. New, affordable senior apartments open up the small- to medium-sized single-family housing stock; as it is more profitable to build higher-end homes, these single-family homes are seldom built, limiting the new supply.

Increasing the supply of housing typically creates downward pressure on overall housing prices, and the increase in the supply of available housing will allow for economic expansion, such as the addition of new medical offices, hospitals, grocers and retail in Canton. Residents of affordable developments can spend closer to 30% of their income on rent, allowing for a larger amount of disposable income to be spent within the Canton economy. Currently, only around 800 residents live and work in Canton, while more than 9,500 need to commute to the city every day. Increasing the affordable-housing supply will have a great economic impact, in that it will enable residents to live, work and play within the city of Canton. 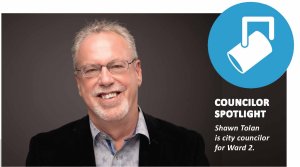 “An elected leader in a municipality is the bridge between their constituents and those looking to involve themselves in their communities,” Tolan said. “And when each stakeholder, i.e., elected leaders, developers, financial institutions and community members, plays his or her role, rent-burdened families can find affordable, quality and safe places to call home, changing outcomes for families. Because, for the first time in their lives, their future isn’t dictated by their ZIP code.”