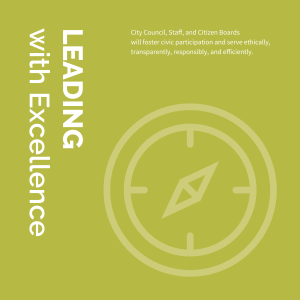 When the city of Canton created its Roadmap for Success and adopted it in 2021, it was a plan to guide the city for the next 10 years of work. Now, at a little more than two years in, the city has accomplished more than 70% of the goals and projects the Roadmap set forth. This was possible because of the excellence in leadership from the mayor, council, city staff, boards and commissions.

Celebrating City Services
“Municipal government is the level of government closest to the people,” City Manager Billy Peppers said. “Our city government is nonpartisan, so it is built on people with ideas, and not party platforms. The services of your city government impact your daily life: police, fire, water, sewer, parks, streets, development, code compliance, recreation, sanitation and community events.”

Canton will celebrate Georgia Cities Week, sponsored by the Georgia Municipal Association (GMA), April 23-29, with a variety of events to recognize the leadership and services the city provides to the community.

“The city of Canton works diligently to maintain the highest possible quality of services to our citizens,” Mayor Bill Grant said. “In celebration of Georgia Cities Week, we will share the ways we continue to move Canton forward.”

Initiatives to Lead
Canton recently was named one of five municipalities in the state selected to participate in the Georgia Initiative for Community Housing (GICH). This three-year program provides collaboration and technical assistance to help communities create and implement a locally based plan to meet their housing needs.

Housing Initiatives Director Ken Patton led the charge on providing a thorough application for GICH on the city’s behalf. He believes participation in the program is critical for the city to have a successful strategy for building a housing plan.

Game Changer
GeorgiaForward selected Canton City Planner Brittany Anderson, who has worked for the city for more than five years, as one of the 50 evolving professionals to serve the organization’s 2022 Young Gamechangers (YG) program. YG is a unique leadership action program hosted by GeorgiaForward, a nonprofit organization administered by GMA. YG brings professionals from across the state to work on the persistent challenges of one Georgia community; the 2022 selected city was Dalton.

A Vision for the Future
During the GMA 2022 Cities United Summit, GMA and Georgia Trend magazine presented the city of Canton with a Visionary City Award for the City’s Roadmap for Success. Awarded to nine cities each year — three from each population size group: less than 4,999, 5,000-24,999 and more than 25,000 — the award honors cities that have created positive community change through effective civic engagement and collaboration.

“The city was extremely honored to receive the Visionary City Award from GMA and Georgia Trend magazine,” Grant said. “This prestigious recognition for the city of Canton’s forward thinking, collaboration and civic engagement is a true testament to the exemplary leadership our council and management team have demonstrated with the creation and implementation of our Roadmap for Success.”

Top 10 in 10
In 2022, City Engineer Bethany Watson was recognized as one of the Top 10 in 10 Young Professionals to Watch in Cherokee County. The Cherokee Chamber of Commerce and Enjoy Cherokee Magazine give this annual award to 10 county residents, under age 40, to watch in the next 10 years.

“As a member of Team Canton, Bethany leads many projects including trails, transportation, development engineering and the new parking deck,” Peppers said. “We are proud of her and this recognition.” Watson has worked for the city of Canton for more than eight years.