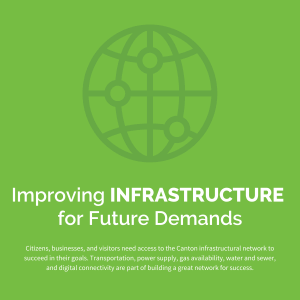 Improving infrastructure for future demands was a part of Canton’s plans before the Roadmap for Success was created. To achieve this tenet, the city will continue to build on this foundation. Here are some updates on infrastructure projects in the works, including the Water Pollution Control Plant, state Route 140 improvements and city-county road connectivity projects.

Heritage Park Restrooms
New restrooms are being installed at Heritage Park. The facility will be located at the trailhead, near the parking area behind Popeye’s and Canton Mill Lofts.

Water Pollution Control Plant
In January 2021, Canton successfully secured $65 million in financing for the expansion of its Water Pollution Control Plant, which will allow for a complete upgrade of the existing systems and structures as well as an expansion of treatment limits from 4 million to 7 million gallons daily. To date, the expansion of the city’s sewer plant continues to be on time and on budget. Canton expects to provide biological treatment processes to expand capacity by summer 2023, with the final project completion in late 2024.

Canton Police Records Management System
Canton Police Department has a new software system through Central Square that will provide more efficiencies in police operations. It will take a period of months to convert the data and roll out the operation, but thanks to the hard work of the police department research team, this system will be in place very soon. Additionally, new Panasonic Tough Books were purchased for the department. The funding for the software was from Police Impact Fees charged on new developments in the city, and the new laptops were funded through the special-purpose local-option sales tax.

City-County Collaborative Efforts
A city-county project aimed at providing better road connectivity cleared several hurdles recently. The Technology Ridge Parkway project will realign the Heard Road and Fate Conn intersection in north Canton. Phase I recently was approved by the state, and the county started construction. In this phase, a new roadway will be built between Bluffs Parkway and Fate Conn, just north of Park Village. The final project will include road improvements to the Cherokee County Airport.

Teasley Middle School Intersection
The construction of new turn lanes and a traffic signal at Hickory Log Creek Drive and Reservoir Drive near Teasley Middle School is almost complete. A delay in the scheduling of concrete pushed the curbing portion of the project beyond the start of school. The turn lanes have been installed and utilities have been relocated. The mast arms and signal equipment are the remaining portion of the project to be completed.

Pedestrian Bridge Grant
The city’s grant application, seeking more than $600,000 in matching funds from the Appalachian Regional Commission for a potential pedestrian bridge on the Etowah River, recently was approved. Canton’s Economic Development and Tourism Manager Angie Busby worked tirelessly to submit all the documents and credentials for the project. Once constructed, the bridge will connect the trail segment, currently under construction, between Heritage and Boling Parks with The Mill on Etowah. As a second phase to the project, the city would provide for the creation of river access for canoes, kayaks and tubes at The Mill side of the bridge.