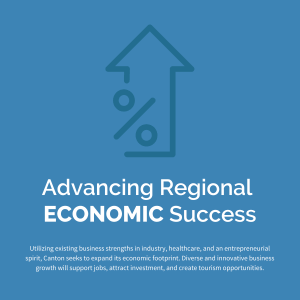 All great cities dedicate time and resources toward increasing economic strength, so it is no surprise to find a tenet dedicated to regional economic growth in Canton’s Roadmap for Success. But, what exactly does working to advance regional economic success mean?

The key component of this tenet centers on development and investment in the city: creating jobs, attracting investors and creating tourism opportunities. These results ultimately serve the larger community, not just those within Canton’s city limits. Advancing regional economic success depends on all of the Roadmap tenets.

An important step forward was taken in 2021 when Canton’s leadership requested a new position: manager of economic development and tourism. Angie Busby joined Team Canton in that role, and is working to define what tourism means here.

One major initiative under Busby is creating a product to market Canton as a destination, which requires the designing and building of a destination-branded website to share Canton’s history, as well as its future. Additionally, with the creation of the Canton Cultural Arts Commission (CCAC), economic goals are being met through vibrant public arts projects that create a sense of community and place. The CCAC has many projects in the pipeline, and is overseeing a new, citywide Arts Master Plan, due to be completed in 2023. (Turn to Page 10 to get to know the artist who created Canton’s most recent mural on Lee Street.)

“Capturing the synergy between culture and commerce is a top economic driver, not just in Georgia, but nationwide,” said City Councilor Brooke Schmidt, who has taken an active role promoting public art and tourism in Canton since 2020. “Businesses, residents and visitors are drawn to a city where arts and culture are known to be an essential element of life.”

In addition to public art placemaking, the city recently applied for an Appalachian Regional Commission grant for a connector bridge allowing access from its park trail system over the Etowah River to The Mill on Etowah, an award-winning, mixed-use development that sits along the river. This connection will allow walkability from Canton’s parks to the downtown district, and will promote the Etowah River as a destination. Building on connectivity to drive the economy, the city also has hired a firm to come up with plans to create a more pedestrian-friendly West Main Street, to better join The Mill on Etowah and the Railroad Street area to the downtown district, boosting visitors to each.

Of course, the foundation of all economic drivers is attracting industry to our area. Offering companies a location that is attractive to potential employees when it comes to livability is key. Canton works closely alongside the Cherokee Office of Economic Development to attract international, light industrial businesses. Canton recently partnered with COED to secure a technology park of more than 40 acres off Bluffs Parkway, while Canton Corporate Park already is underway off Knox Bridge Highway.

“Economic development is all about building partnerships — an area where the city of Canton excels. From the up-and-coming Canton Corporate Park to mixed-use projects like The Mill on Etowah, our team at the Cherokee Office of Economic Development is proud to work alongside the city in developing and promoting high quality projects like these that keep talent local, diversify the tax base and create a premier destination for companies looking to locate or expand in Cherokee By Choice [a strategic plan that guides the county’s economic development efforts],” COED President Misti Martin said.

“Creating a community our residents are proud to work in and to call home is the ultimate goal,” Busby said. “The economic vitality of the city of Canton is dependent on our leadership, businesses and residents to help navigate the course to success.”