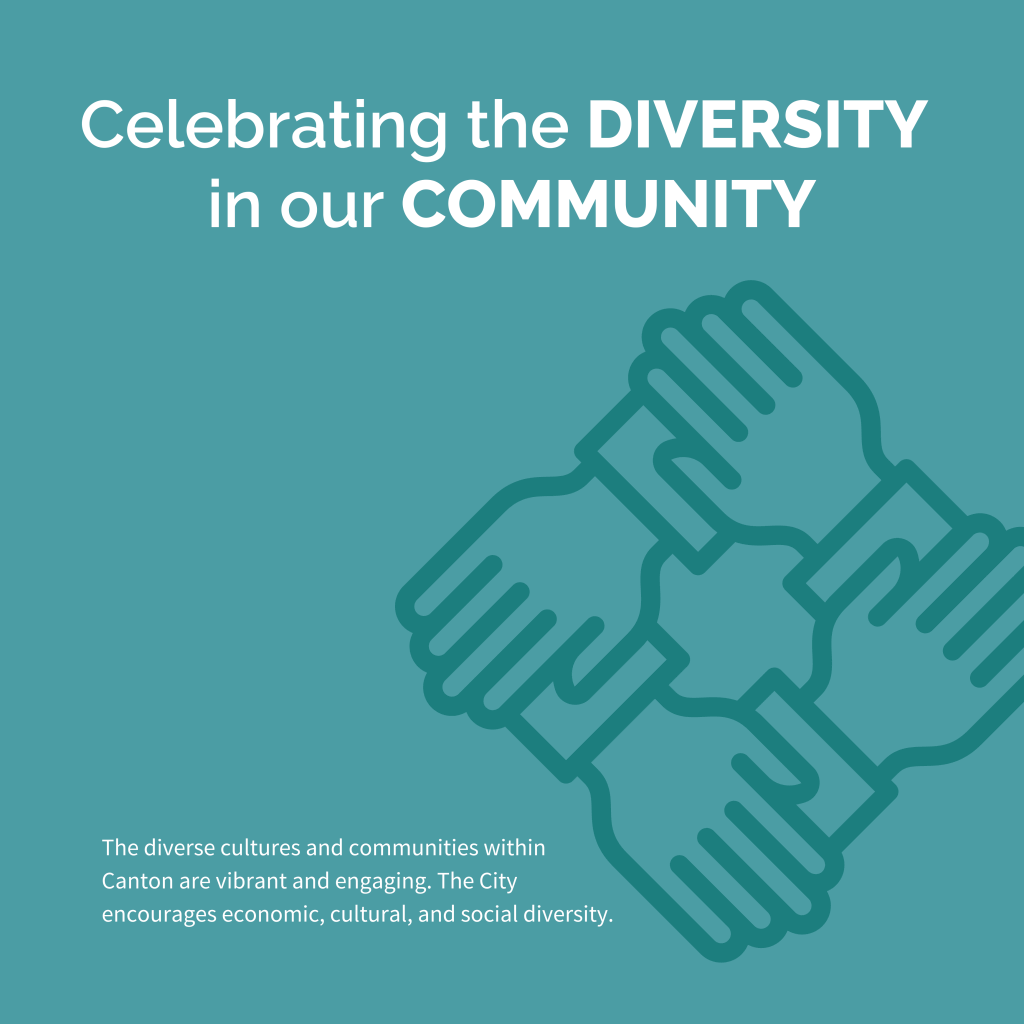 Making Sure Everyone Is Included in City Plans

Canton is one of the fastest growing cities in Cherokee County, with a diverse population of residents. The city’s mayor and council knew diversity and inclusion would be an important component when creating the Roadmap for Success. They kept in the forefront that diversity can come in many forms — cultures, ages, ethnicities, abilities, etc. — and inclusion is providing a way for ALL to experience what Canton has to offer, while also giving opportunities to celebrate those groups.

“The City Council adopted a roadmap to focus and measure our progress toward common goals,” said Will Carlan, City Councilor, Ward 2. “The council recognized opportunities to make progress toward the goal of a city whose residents are respected, celebrated and engaged, regardless of their race, religion, nationality, ethnicity or sexual orientation. You should feel welcome and supported in Canton because you exist — not because of what you can provide to the community at large.”

After the Roadmap was adopted in 2021, the city wasted no time setting goals, making plans and driving actionable results for each tenet. Projects that were already underway for celebrating diversity included: establishing a Diversity and Inclusion Task Force and a Public Safety Citizens Advisory Board; developing a new city website; creating a Marietta Road community initiative and Sunnyside community campaign; installing free public WiFi in all city parks, and launching CanTeen.

CanTeen, a high school leadership organization and an active engagement outreach initiative to high school students, was the vision of Canton Mayor Bill Grant. “As mayor, one of my primary goals is to more actively engage our city’s youth to incorporate their vision, hopes and dreams for the future,” he said. “This is imperative in growing future leaders and having our youth return to Canton once their secondary education is completed.”

An event also returning this fall is the Multicultural Festival. Developed through a partnership with the city, Canton Police Department and Best United Ministry, the festival will welcome more than 10 cultures. Representing Latin America, Asia, India and the United States, the event offers a taste of these cultures through food, performances and entertainment.

The city not only seeks diversity and inclusion in its community outreach, but also through its staff, council and committees.

“The City Council encouraged and directed City Manager Billy Peppers to develop hiring practices ensuring any applicant will be judged only on their merits and qualifications,” Carlan explained. “These policies and practices are designed to minimize, and hopefully eliminate, any implicit bias in the hiring process.”

Additionally, this summer, staff will receive diversity and awareness training through the Georgia Municipal Association’s (GMA) Diversity, Equity and Inclusion Division so any contact with or any communication to the public is done with respect and compassion.

Recognizing the need for resident involvement in the development of city policies and objectives, the Diversity and Inclusion Task Force draws from residents of different backgrounds and experiences to offer advice and suggestions on how Canton can reach its full potential.

“This group reflects the hard work of the GMA and its efforts to create and distribute resources across Georgia to cities to foster diversity, equity and inclusion efforts,” Carlan said. “No one person or group of people can be fully aware of the impact different policies and standards will have on minority and at-risk communities. With a variety of voices on the task force, the council hopes to craft respectful and fair ordinances, policies and communication strategies.”