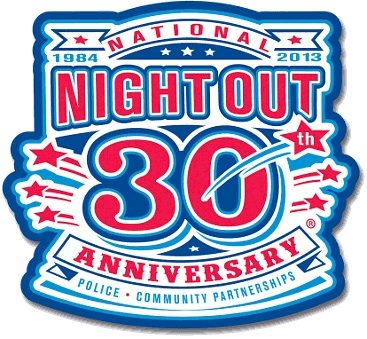 National Night Out, “America’s Night Out Against Crime” is celebrating its 30th anniversary and the Canton Police Department will be participating. The event will take place on Tuesday evening, August 6th  from 6:00 PM to 10:00 PM at Brown Park in Downtown Canton.

The National Night Out program began in 1984 as an effort to promote involvement in crime prevention activities, police-community partnerships, neighborhood camaraderie and send a message to criminals letting them know that neighborhoods are organized and fighting back.  The effort culminates annually, on the first Tuesday of August with the nationwide National Night Out.  The program now involves over 37 million people from all fifty states, U.S. Territories, Canadian cities, and military bases worldwide.

The Canton event is free, thanks to the generous donations from numerous supporters in the community. There will be be live music, food, inflatables, kids’ crafts, and police and fire demonstrations. The primary focus is to provide a setting where community members can spend an enjoyable evening in the park getting to know your neighbors, meet local public safety officials, and commit to helping law enforcement reduce crime.

National Night Out is designed to –

Come out to this great event and support your public safety officials, the community, and send the message that Canton is fighting back against crime!

For more information on Canton Night Out, you can visit the City of Canton website at www.canton-georgia.com