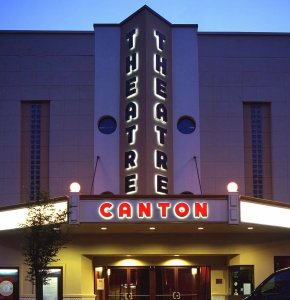 Built in 1911 as a silent movie theater, the historic Canton Theatre has been in operation for more than 100 years. The theater has seen changing times and held several names, such as The Bonita and The Haven, before finally being named Canton Theatre during a renovation in the late 1930s. The Canton Theatre played the best motion pictures of the time and was described as a “thoroughly modern sound and movie palace, with all the comfort, light and cheer that denotes a first-class picture theater housed in the larger cities.”

In the 1970s, the building fell into disrepair, as Canton residents began to travel to newer, more modern theaters or drive-ins to view films. The Canton Theatre sat idle for many years and was known to local residents as “the pigeon roost” because of all of the birds that made their home inside. After many attempts at private restoration in the 1980s and 1990s, city officials saw value in the historic structure and stepped in to save it. The city acquired the property and secured financing through the Downtown Development Authority to restore the theater to the 1930s art deco style. Since a dedication ceremony in May, 2000, the theater has been home to local and traveling theater productions, musical entertainment, comedians and film screening events.

After more than a year of being closed due to COVID-19, Canton Theatre is poised to make a comeback. Beginning in September, the theater will have a continuous lineup of entertainment the rest of the year. On Sept. 11, at 7 p.m., the theater will present a showing of the classic film “Breakfast at Tiffany’s.” The following two weekends will be devoted to the theater’s long-standing partner, Cherokee Theatre Company, which will present “The Sweet Delilah Swim Club,” a full-length comedy about five Southern women who meet each August at a favorite beach cottage to catch up, laugh and meddle in one another’s lives.

On Oct. 7, the Etowah Film Festival returns, with a weekend full of film shorts and full-length features made locally and around the world. Other film events in October include the 1991 “The Addams Family”; a special showing of “Hocus Pocus,” in partnership with Canton Historic Haunts Ghost Tours; and a Halloween weekend showing of the horror classic “The Shining.” A variety of concerts, film events and live theater productions also are scheduled for the remainder of the year. For more information and details on future events, call 770-704-0755 or visit cantontheatre.com.

– Kristin Norton is a Cherokee County native with a background in the performing arts. She is the director of the Historic Canton Theatre.