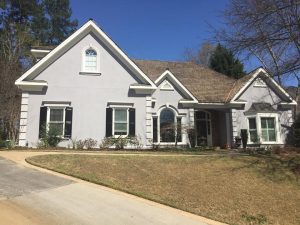 Would you rather have the largest possible lot for your home, or a smaller lot plus some community-owned green space?

Cherokee County’s land use plan defines targets for the maximum number of residential units per acre in each area of the county. Limits on residential densities provide development that’s appropriate for the area, and keep some restraint on overall growth and the total build-out population of the county.

Within those density limits, there’s been debate for years about whether it’s better to make each lot as large as possible, or to use smaller lots plus areas of community-owned green space. To allow that second option, the county adopted optional Conservation Subdivision (CONSUB) development standards about 15 years ago.

The standards were originally pretty simple. The lots in a CONSUB could be half the size of traditional lots for the applicable zoning district, but the number of lots couldn’t exceed the theoretical maximum that could fit on the property using traditional lot sizes. The leftover land was left as green space.

Developers loved CONSUB development because it gave them the maximum lot yield on property that was partly unbuildable, due to flood plain, wetlands or other natural constraints.

The CONSUB standards have changed several times. The first change was to more restrictively determine the maximum number of lots. Half the unbuildable land and all land occupied by roads was taken out of the lot-yield calculation. At least 40% of the total land was required to be green space. That made the lot yields in CONSUBs more consistent with traditional development.

Later, the CONSUB requirements were liberalized to allow even smaller lots, but the lot-yield calculations remained the same.
There continues to be some opposition to CONSUBs based on the character of development they bring to an area. Even with about the same number of lots, the smaller lots in CONSUBs don’t always look like they belong in areas that mostly have larger, traditional lots.

The county is considering another update to the CONSUB requirements. The biggest proposed change would require a developer to get specific zoning approval to use the CONSUB standards. It would no longer just be the developer’s choice. Required CONSUB lot sizes would be restored to 50% of traditional sizes. Green space would have to equal the total area of unbuildable lands plus 40% of the buildable land.

We expect to hold hearings on the proposed changes in July and August, with a decision by the end of that time. As always, I’m interested in your thoughts. Please email me at hjohnston@cherokeega.com.

– Harry Johnston is chairman of the Cherokee County Board of Commissioners.