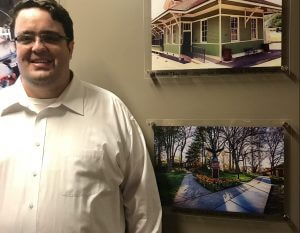 Jeff Reed, campus photographer at Reinhardt University, with his photograph that was chosen from the Cherokee in Photos contest sponsored by the Cherokee Office of Economic Development. Reed’s photo, with others, is on display in the gallery at the offices of COED.

Horizon Training Center, which offers yoga, fitness and martial arts, has moved to 182 North Street, two doors down from Stouts Growlers and next to Local On North.

Holly Springs Chiropractic and Massage moved to 120 Hickory Road in Holly Springs. By making the move, Dr. Ollie Evans has increased the office space in a location more central to downtown Holly Springs. 678-880-6616. On Facebook and at www.chiropractorcantonga.com.

An El Nopal Mexican Restaurant will be built at 3440 Sixes Road, the former location of the BridgeMill subdivision sales office. With an expected opening in February or March 2018, the restaurant will offer a rooftop bar, taking advantage of the scenic view, and daily buffet. The menu will be the same as the Marietta location. www.elnopalmarietta.com.

A Dairy Queen will be built at 4516 Holly Springs Parkway, near Home Depot. A One Life Fitness center also will be built in that area. No opening dates were available at press time.

Orange Theory is expected to open in late September or early October at 3640 Marietta Highway, Canton 30114. Pre-sales and more information available at 470-592-0098 and on Facebook.

Panera Bread plans to break ground on Academy Street next month. The popular restaurant chain, known for its sandwiches, soups, salads and coffees, is set to open next spring. Panera will feature a drive-thru option.

The Coffee Vineyard will open Sept. 30 at 2800 Holly Springs Parkway, Suite 100, across the street from the train depot in Holly Springs. The Vineyard offers Third Wave coffee (drips, press, pour overs), boutique wines, craft beers and charcuterie plates, as well as meeting spaces and resources for young entrepreneurs. 470-377-2137. More details on Facebook and at thecoffeevineyard.com. 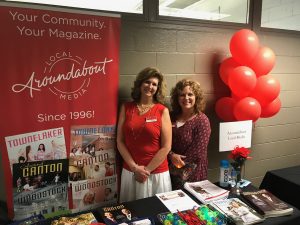 Aroundabout Local Media president Patty Ponder and market manager Katherine Amick were one of the 59 exhibitors at the Cherokee Chamber of Commerce SchmoozaPalooza. The networking event, held at Chattahoochee Technical College, was a unique opportunity for businesses and nonprofits to share information with each other and local residents, and learn more about the opportunities in Cherokee County.