In 2019, Michael Garcia was a senior at Cherokee High School and the chair of 21st Century Leaders. The program connects, transforms and inspires students across Georgia to explore career opportunities and become leaders in their schools, communities and, ultimately, the workforce. During a 21st Century Leaders brainstorming session with other Georgia high school students, Michael came up with an idea for the program’s December community service event: a holiday fundraiser for students at Hasty Elementary.

Michael, who attended Hasty as a child, reached out to the school’s counselor, Mable Ferry, and students in the 21st Century Leaders group started collecting Christmas gifts for children who needed them most.

This is the fourth year Michael has organized the holiday fundraiser, and it has gotten larger each year. With help from his sister, Alisa, who graduated from Cherokee High this year, he was able to expand the fundraiser’s reach to Knox Elementary in 2021. Michael has been working with Gwen Freeman, Cherokee County School District’s Title III family service bilingual assistant, to reach middle school students, as well, this season. The plan is to expand to Teasley Middle. Over the past three years, more than 200 students have received Christmas gifts. The organizers are hoping to touch the lives of about 150 students this month.

Many high school students participate in at least one community service project during their four-year career, but most do not take the initiative to continue them after they graduate. Michael’s inspiration comes from Mrs. Glandorf, his fourth-grade teacher.
“I knew what it was like to come from a low-income background,” Michael said. “The week before we left for winter break, Mrs. Glandorf gave everyone in my classroom a beanie and a scarf that she made herself. This act of generosity has stuck with me my entire life, and I cannot be more grateful for this. I actually still have the gift bag, because of how special and meaningful this was for me.” 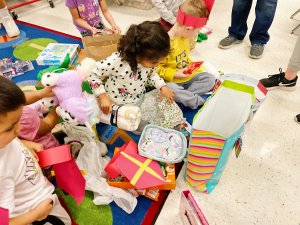 Michael and Alisa have not come up with an “official” name for their fundraiser, yet. “However, for now, we decided to name it the Glandorf Project, in recognition of my teacher, who was one of the first educators to instill in me the value of education. She was a true champion in practicing what she preached — ensuring every student succeeded,” he said.

Alisa first began helping Michael in 2020. “From not only helping me organize and plan, she is especially influential when it comes to connecting with the students we speak to,” he said. “Since we deliver these gifts ourselves, we use this as a chance to show students that their ‘success’ story is possible, too, because we were in their shoes at one point.”

The fundraiser is successful because of generous people in our community. During its second year, Michael was a server at Tres Agaves Mexican Restaurant in Holly Springs. His boss, Marcy Tirado, let him put out a box and a poster for donations. As a server, Michael learned to build relationships and talk to business owners, and the response from the community has grown each year.

“In 2021, Alex Gomez, executive vice president of Chick-fil-A Canton, donated ‘your choice, your treat’ breakfast cards, so students could get a free breakfast item. I am also inspired by the generosity of Brandon and Karen Williams of Atlanta Facility Services and Marcy Tirado each year. They are true community leaders who have demonstrated to me what it means to lead with a head and a heart,” Michael said. 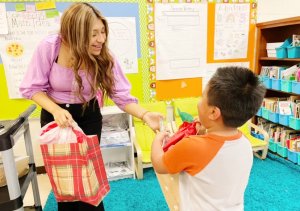 Now a student at the University of Georgia, Michael had the opportunity to do a TED Talk his senior year of high school. He spoke about inequities in education, a topic that is near to his heart.

“In order for a student to succeed, they need to have their needs at home met. If they are thinking about something to eat, or what clothes they are going to wear, they can’t focus on learning,” he said.

The Garcia siblings purchase some bigger gifts for students, as requested, but they also send stockings with smaller things needed for school, like markers and colored pencil pouches. Each year, they find that students are more excited about the little things than the big things. “That keeps us going,” Michael said.

If you are interested in getting involved next year, Michael and Alisa accept physical and monetary donations. For more information, contact michael_garcia1015@yahoo.com, 470-601-7566, or send a direct message on LinkedIn: www.linkedin.com/in/michaelgarciatirado.